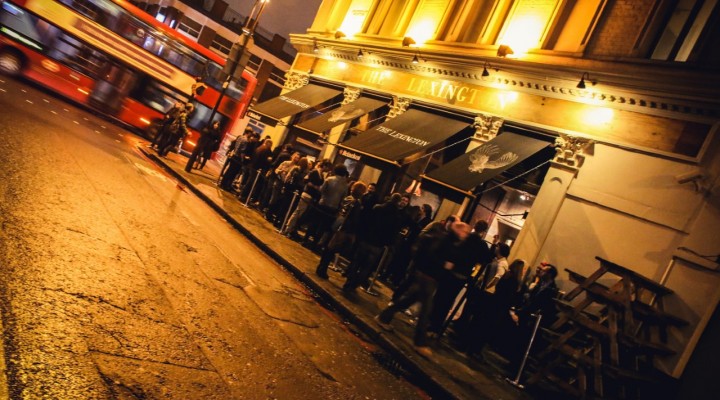 A motorcyclist says he owes his life to quick-thinking customers of an angel.london pub who rushed outside after a crash to hoist up a large van crushing his chest.

Thirty-eight-year-old Daniel Brennan was riding up Pentonville Road when he skidded and fell under a van near the junction with Penton Street. Horrified drinkers at the Lexington reacted immediately and gathered round to lift the van off him. His spine and pelvis were fractured and almost every other bone shattered and he spent weeks in a coma – but against the odds he survived.

“There’s no question – fifteen heroes from that pub saved my life. ”says painter and decorator Daniel who, after six months recovering, has recently managed to get back to his job locally as a supervisor.

“I would have died if they hadn’t helped. I can’t thank people from the Lexington enough. I was drifting in and out of consciousness but was awake enough to know I was in a BAD situation. The van was crushing my chest – it was like trying to inflate my lungs with a straw.”

Manager of the Lexington Chris Smith said it was lucky they had a sell out band on that night who had just finished a set, and people were heading outside for a cigarette. One of his managers was on the scene immediately directing people to get the van off Daniel.

Says sergeant of angel.london Police Team Chris Walsh: “Regulars from the Lexington went the extra mile. They really are heroes because their quick-thinking and fearlessness saved a man’s life. They should be very proud of themselves.”

Daniel is hoping to visit the Lexington soon and buy everyone a drink. “He won’t be buying us one. If he is well enough to come in here, we shall definitely be treating him,” says Chris Smith.